The results of our testing are in and Vectra Virtuoso performed even better than we had hoped.

Thank you to everyone who ordered a sample and especially those of you who took part in the beta-testing and contributed to these results.

We've picked out the highlights to share here and will run though them briefly.

The three factors we were most concerned with were Invisibility, Performance and Strength.  Starting with invisibility, you'll see that the Virtuoso thread performed wonderfully: 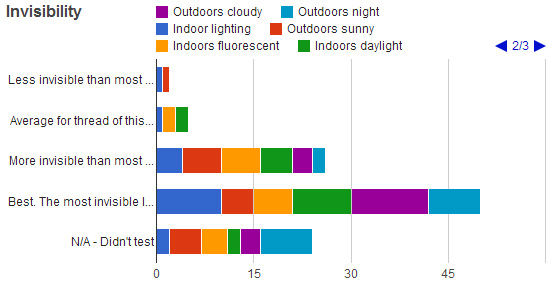 What we were really curious about was finding out how this thread compared to the John Haar EZ Strip thread.  Luckily, many of our testers were already intimately familiar with the EZ Strip thread and again, the Vectra performed like a champ, beating the EZ Strip in every category: 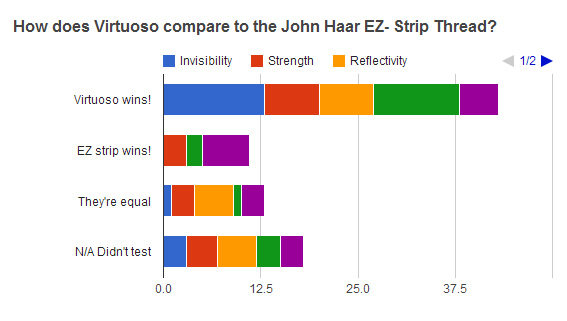 The next factor considered was strength.  This is where the Virtuoso started to surprise us.  And where the testing really paid off.  The stuff is surprisingly strong, according to the findings of our testers: 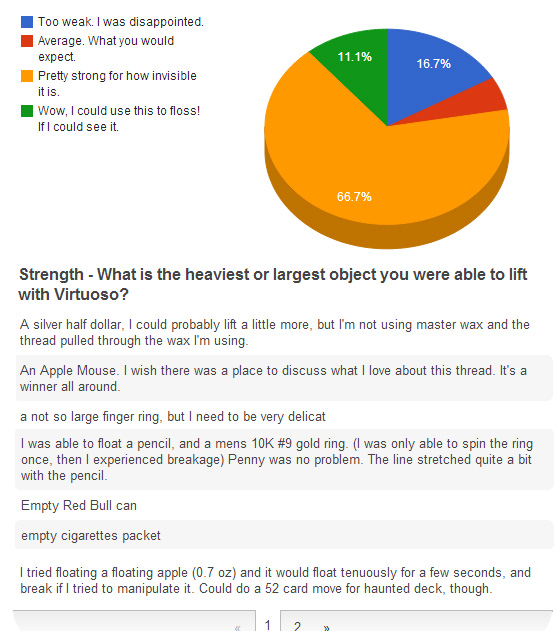 So it turns out that Vectra Virtuoso is more invisible than other threads but without sacrificing a bit of strength!  It's just as strong as the John Haar EZ strip, or wooly nylon thread.  And what's more, we knew Virtuoso had one more trick up it's sleeve.  Exceptional performance.    We didn't know if our users would notice, but they did.

When asked what they liked most about Virtuoso, invisibility topped the chart.  But as you can see below, the next favorite was Control and Responsiveness, taking a big chunk of the pie proportionately.  Also notice the next runner-up, Elasticity.  A feature unique  to Virtuoso, it has a perfect elasticity that actually absorbs shock, resulting in a smoother performance and increased feeling of control.  We're glad you noticed! 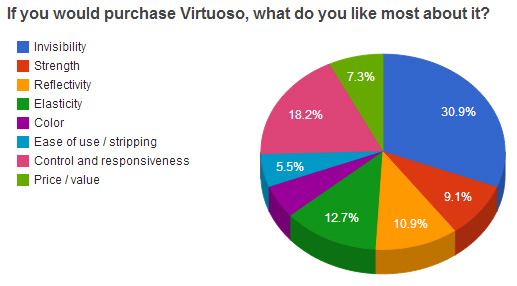 Again, we really want to thank our beta-testers for doing such a great job.  It feels great to bring a product to market that's been thoroughly tested and given your stamp of approval.

Lastly, here are a few comments from testers to give you some idea where Virtuoso lies in the spectrum of threads.  It's our most fragile Vectra™, we expect it to be the choice of experienced thread workers, not necessarily the best choice for a beginner.  In that case we recommend the Original Vectra Line.